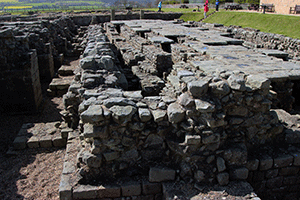 It is quite probable that this fort was built during the governorship of Julius Agricola between the years of 78-84 AD. Agricola at this time conquered the north of England and also the southern part of Scotland and the fort itself was very successful. It was later used as a supply base turning into an arsenal in the third and fourth centuries. It has had a mixed history and it seems to have been replaced by the fort at Halton when Hadrian’s Wall was built.

Both tactically and commercially Corstopitum thrived with a large civilian settlement nearby. The base lay on Dere Street which was tactically important when the invasion of Scotland was being nurtured and it was rebuilt in 139 AD in readiness. It further became an ordnance depot after the withdrawal from the Scottish campaign and as such catered for the entire northern region. It remained in use in this capacity until Rome abandoned Britain.

The civilians were made up of some of the wealthiest folk in the area and amongst these lived the likes of leather makers, potters, smiths and other craftsmen. The museum contains many of their wares. Natural minerals were extracted from local mines and these consisted of iron, coal and lead and some of these goods were traded with folk living north of the Wall.

Corstopitum is a fabulous site to visit with quite a lot to see. The site extends beyond what is visible but that does not detract from your enjoyment in any way. An aqueduct feeds a fountain near two large granaries, one of which contains a mullion stone and this is the only example in Britain where it remains in situ. A courtyard building that was not completed is on view and is huge and work ceased on this around 180 AD. Its purpose is unknown but suggestions range from a Headquarters Building for a legionary fortress or a forum of a civitas (Roman Town). There are two military compounds to the south as well as temples. The two areas, north and south, are separated by the Stanegate which ran through the middle of the site.

Perhaps the most famous object from this site is the Corbridge Lion. It was discovered in 1734 by a young girl sent to gather sticks and her father sold it to a goldsmith. The Duke of Northumberland took it as treasure trove and housed it in Alnwick Castle.