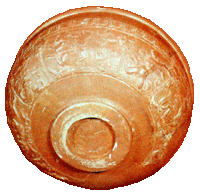 Samian Ware is probably the most known form of pottery from the Roman period. It was widely used throughout the Empire and probably originated from Greece where on the island of Samos is found its first form of production. It is very easy to identify being a rich red brown in colour and smooth of texture. It was finely produced and often had some excellent form of detail while some pieces were often marked with the makers name or stamp. This helped to identify the date of production for that piece of pot and could tell us a lot about where it was from etc. This type of pot used in Britain was mass produced in Gaul and imported. Earlier forms of Samian were made in Italy and called Arretine Ware after Arretium where it was produced.

Archaeologists will recognise Samian Ware immediately it is unearthed because it is so distinctive but also the most common form of pot usually excavated from most sites. Excitement rises when the discovery has a form of decoration on it and these finds are more common in villas for example as they were the more expensive pots to buy. Some features of decoration that have been found are Diana (Goddess of Hunting), Bacchus (God of Wine), dogs, dear, bears and lots more. Typical uses of the pot were for tableware and a lower quality Samian Ware was produced in Britain during the second century.

Although Samian Ware is distinctive in its makeup it is by no means restricted to one type of bowl or vessel. Most of the crafted ware that arrived in Britain was decorated or plain and could be made into such forms as dishes, cups and bowls. As with other moulds, when made, Samian Ware moulds could be used as long as they would last but only one mould could be used at one time so many a pottery would require lots of them. This gave the opportunity for uniqueness although the same pattern would be used for many. The pattern is created by using clay stamps with figures or patterns on them which would be pressed into the inside of the mould. Occasionally a different form of pattern making was used by actually sticking or pressing the figures onto the sides of the vessel, cutting the pattern using a knife, attaching plaques or even crafting the pattern during the spinning of the vessel on the potter‘s wheel.