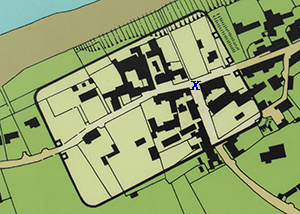 Map showing location of fort at Bowness on Solway

Covering almost seven acres this fort is thought to be the last on the Wall at the western end. Experts have argued for and against the continuation of the Wall down the west coast to Maryport for a very long time. In 1601 Reginald Bainbrigg wrote ‘..the foundations of the picts wall may be sene, upon the west skar at a lowe water, covered with sand, a mile and more within the sea, wher the people get fishe.’. MacLaughlan, usually more accurate in his description says the following ‘Beyond Bowness we find no satisfactory account of the continuance of the Wall, though the old inhabitants point out at about 250 yards from the north-west angle of the station, a spot where a quantity of stone was dug out of the beach many years since, for building purposes, and the line of it was followed for some distance under the sand, without arriving at the end of it. The direction of these remains, as pointed out by the old people, would fall in with a continuation of the north front for about 100 yards, thence down a natural ridge, well suited to a line of defence, and on the south of the school house, into the water.’. Are we to take from that that the Wall may have gone into the water, as stated, like it did at Segedunum where a monument may have been built on top to mark the start of the Wall? Could the same have been done here to mark the end of the Wall?

The fort stands upon a promontory overlooking the Solway and was just short of seven acres in size. In 1930 the south rampart was traced north of the church with the south gate nearer the west end of the fort and the western wall contains the porta praetoria. Further excavations in 1973 found traces of the original western rampart that was built in turf and clay. A timber gate tower was also found along with evidence for other timber buildings within the fort. The fort was rebuilt in stone but the date for that is, as yet, unknown.

A stone altar is to be seen built into a house in the village and has an inscription that Sir John Clerk, visiting the site in 1739, had a young schoolmaster climb 16 feet up a ladder to copy it.

This altar was set up by Sulpicius Secundianus, tribune of a cohort, for the health of Gallus and Valusian.

The X on the map shows the position within the fort area where the pub lies shown in the picture to the right. Only the outline of the fort is shown in the map while all other shaded areas are modern structures which lie above the fort grounds.