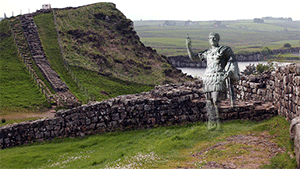 The Roman Emperor Hadrian was a popular figure in Ancient Rome. Today, across the world, he still is. He achieved many things during his reign which was begun with the idea of consolidating his Empire by pulling forces from distant battles he considered to be a detriment to Rome. In contrast he decided that building barriers on the borders of the Empire was a much better strategy with the aim of protecting the lands gained through earlier conflict and shutting up shop.

Map of Hadrian’s Wall - click any red square to go to that fort page.
Wall and major Roman forts and roads are shown. Presumed roads are detailed as dotted lines.
The Stanegate is presumed to have started at Corbridge and run west to at least Vindolanda creating the first Roman defensive line in Britain although its initial purpose was that of a strategic road.
The line of the Wall is shown in red.

Trade would still be a very important aspect of Roman life, as it had been since its inception around 750BC, and without doubt the most famous of these barriers is Hadrian’s Wall in the North of England stretching across Northumberland in the East to Cumbria in the West. Far from the Wall being a simple tool to stop the barbarians from the north invading it was actually a very successful control system for traders who wished to deal with the so called barbarians and vice versa. Taxes would be collected either way to help fill Rome‘s coffers. 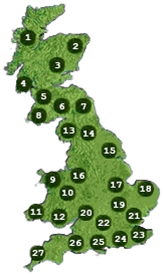 Tribal Map of Britannia, 1stC.
Hover over number for name of tribe
Click for more information

So, what was the real purpose of the Wall? Why did Hadrian feel it necessary to build it in the first place? Was the location the first choice? Who were the soldiers constructing and constantly repairing it? What did the Wall look like and was it ever attacked? How many forts, milecastles and turrets lined its length? Who manned the Wall? Were other defensive elements utilised along the Wall’s length? Lots of questions but do we have the answers? Mostly, for these questions, yes, but they are not complete. The plain truth is we may never know all the answers to most questions still being asked by experts across archaeology. This is precisely why the many mysteries of the Wall draw people to it. It is not just the wonderful landscapes, the remains of the Wall itself nor the many stories it can tell. It is so much more...

Although we do have some spectacular sites along the Wall there are areas where virtually nothing remains unfortunately. Large areas remain to be excavated in years to come but this will be done with due consideration to the future of the Wall and local populations living around it. Future generations may excavate with a far better understanding of the methods used to carry out research for the betterment of ours and future generations. One day, if you have not already, you may just make that personal trek to the monument and, like myself over the years, may even begin to research its history in greater depth. If you manage to visit the Wall all I will say is take everything in and enjoy.

Visit of Hadrian
There is also a possiblity that the Wall was built because of severe losses to the Roman Legions in the north shortly before Hadrian visited Britain and ordered the building of the Wall.

Stanwix (Uxelodunum) fort was where the Ala Petriana cavalry unit was based and was the most important fort along the Wall. The legendary loss of the Ninth Legion is quite possibly true and could well have taken place just north of the Stanegate and this fort and into the Scottish borders where a large ambush could well have overwhelmed the legion.

It is perfectly conceivable that this is one of the main reasons Hadrian was forced to visit the country and head off further incursions into Roman territory and thus the concept of a strong barrier was born.

Wall Defences
On the berm (the flat land on the north side of the Wall) there is a defensive barrier known now as the cippi defences.

Cippi defences
with original Wall
and Wall reconstruction
Three lines of posts or steaks closely piled into the ground, angled away from the fort with sharp thorn bushes wrapped around the posts, and sharpened at the top to form spikes, would have formed a barrier effective enough to at least repel any quick attack on the Wall.

Recently, it was suggested that these three rows of posts could have been sunken upright and built up with other flat posts to form a temporary timber Wall to defend the building of the new and stronger stone defence. If this is correct then it is just as conceivable to think that Rome was in a panic to get this done and could well prove that it was the loss of at least the major part of the Ninth Legion that precipitated the defensive barrier we know now as Hadrian’s Wall.
Amongst the Grandeur
Hadrian‘s Wall... the northern-most boundary of the once proud Roman Empire.

An Empire that lasted over one thousand years and remains foremost in our historical records for its uniqueness, grandeur, military, civilian and political landscapes. An Empire that had it all and in its own indomitable style and greed was to be the cause of its own downfall.

We have countless remnants of the Empire all across the Roman world, still intact in some places, which give us a huge understanding of its history.

But none more so in terms of size and epic proportions than Hadrian‘s Wall itself. It sits across the whole length of northern Britain in some areas of outstanding natural beauty.

This site aims to bring you what is left of the Wall, its surroundings, a little of its history and as the site devlops some photographs of what you will see should you visit this wonderful monument.

For all the efficiency of recording just about everything they could the Romans didn’t seem to think too much of a defensive wall and thus far only one written testament to its construction exists...